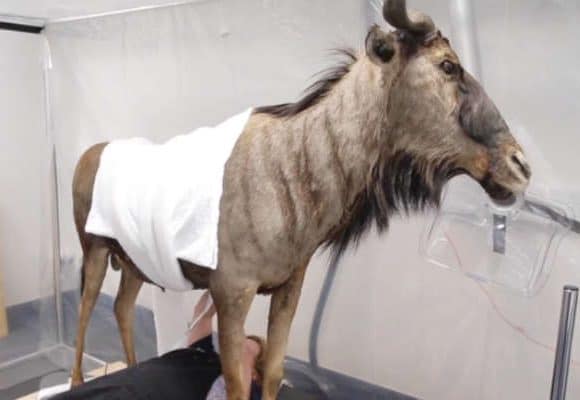 Hidden in the depths of Auckland Museum, down a winding maze of corridors, is a room containing an unlikely trio: A wildebeest, a moose and an alligator.

Although the animals are long dead, their likeness to the living is uncanny thanks to a team of experts working behind closed doors.

The taxidermied animals, along with a wide range of artefacts and historical materials, are being preserved in the museum’s new conservation lab, installed as part of a big remodel of the facility.

The lab, which replaced a much older lab that was no longer fit for purpose, opened in August.

It boasts everything from top-end photography equipment to cupboards full of different adhesives.

Conservators aim to fix objects by creating a good match physically, but also one that is structurally sound.

The wildebeest’s skin has shrunk over time, and sausage casing is being eyed to insert into the tear that runs down its neck.

Museum object specialist Ian Langston was originally a graphic designer before re-training as a conservator. He has now been at the museum for seven years.

“The core principle of what we are doing in physically preserving these objects is so that they can live on generation after generation, so that those stories can be told,” he said.

He once worked on a piece for a women’s rights exhibition – a photographic print on white glass which had been broken into 38 different pieces.

Putting all the pieces back together and being able to see it mounted on the wall for display was hugely rewarding, he said.

At the far end of the lab is a machine jerry-rigged together from a number of different parts.

It uses a tiny beam to detect how sensitive an object is to light and therefore, how long it can be safely put on display, and in what conditions.

A new challenge for the team, which is used to dealing with old objects made of wood or metals, is how to preserve modern objects made of plastics, which can start to degrade quickly.

Being able to purpose-build the lab to allow better work and improve health and safety was key when upgrading the space, the museum’s director of collections and research David Reeves said.

The work of a conservator can be quite varied, with anything from Māori textiles to taxidermied animals needing treatment at any one time, he said.

“The team in the conservation lab also end up helping [other departments] with packing, transporting or displaying items safely.”

The conservators don’t want to do too good of a job of repairing objects, Langston said, as they want someone with a trained eye to be able to identify what has been done to the object in the past.

Those looking closely can see the giant moose head on the table has deer fur on its neck: The colour is a litle lighter and the direction of the fur is slightly off.

Preventative work is the ideal scenario, Langston said – the fewer repairs the team does, the more the object keeps its original form. 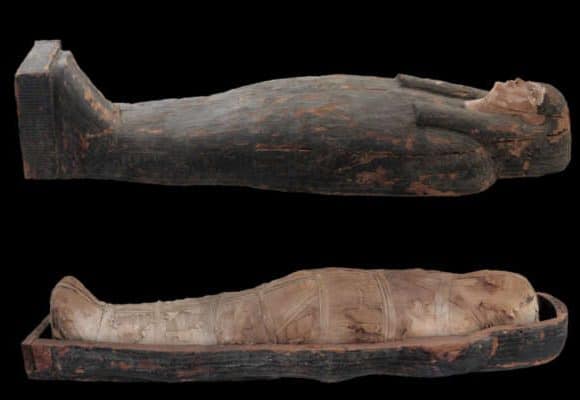 Since 1958 the ancient Egyptian mummy, Ta-Sedgemet has been on display at the Auckland War Memorial Museum Tāmaki Paenga Hira.  Dating from approximately 800 – 500 B.C.E., she lived 2,000 years after the construction of the great pyramids of Giza. Ta-Sedgemet was not a well known woman and her family were perhaps lower middle class in social status. However, they were wealthy enough to afford her a burial with some modest style. Nothing like the marvellous sarcophagus and tomb of the pharaoh, Tutankhamun though.

For a long time not a lot was known about Ta-Sedgemet.  The Human History department at the Museum were aware of her name as it was inscribed on her coffin.  Translating to “she who hears”, historians believed she originally lived in Memphis or near it.  This was indicated by the names of some of the Lower Egyptian gods that were also found on her coffin.

One interesting thing historians noted was, although the inscriptions on Ta-Sedgemet’s coffin were badly faded, someone (probably in the embalmer’s workshop) confused her with the occupant of another coffin.  In some places she was stated to be a female and in other places it was stated that she was male.

To learn more about Ta-Sedgemet, the Museum arranged for a non-invasive CAT scan to be carried out in 2002. This procedure revealed some things about Ta-Sedgemet and helped to solve some of the mysteries of her identity.

The scan showed the mummy was indeed a young woman, aged between 27 and 35 years old.  She was 156.4 cm tall and weighed approximately 47kgs. There was no way of knowing how Ta-Sedgemet died, as the scan did not identify any obvious injury or show evidence of disease. Her teeth were in okay condition, which was unusual at the time because the practice of dentistry was unknown.

The staff at the Auckland War Memorial Museum were careful to show respect, dignity and care for Ta-Sedgemet before, during and after this process.  Therefore, any disruption of the mummy or her coffin was unacceptable and unnecessary.

Much effort has been made by the Museum to ensure that Ta-Sedgemet suffers no further deterioration, 2,500 years after her death her remains are now sealed in a nitrogen filled display case. In this way the low oxygen environment and the reduced humidity will delay degradation.