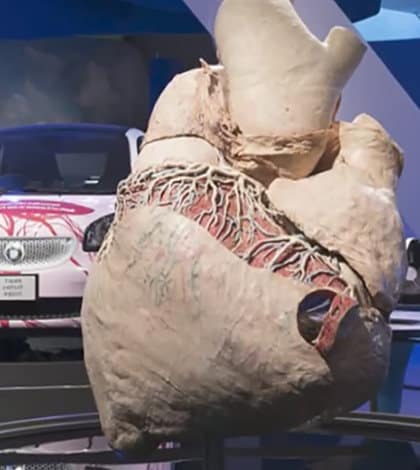 The organ belonged to one of two blue whales whose carcasses washed up on the shores of Trout River in Newfoundland three years ago.

Now visitors to a museum in Canada can see what the heart of the planet’s largest animal looks like.

“Some dinosaurs, like sauropods, are longer but by weight, the blue whale is the heaviest animal that has ever lived on earth and of course its heart is the biggest heart,” Burton Lim, Assistant Curator of Mammalogy at the museum said.

Blue whale carcasses are rarely discovered, as they frequently sink into the ocean’s depths due to having comparatively less blubber than other whale species.

Wow I wish I was there.

Wow that is amazing i want to see that right now

Wow I never knew blue whales could have a heart this big! sad that they died..

That is just so much better if it is not weird

So cool and weird at the same time

Good bigist thing I have seen.