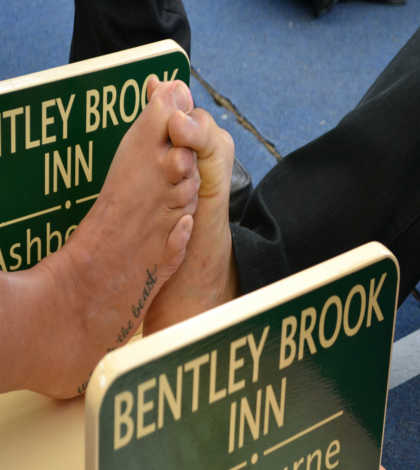 Toe Wrestling is a bit like arm wrestling but with your feet. There are two people in each bout and each contest is the best of three. The toe wrestlers start by locking right toes, then left, then right again. There is a men’s and a women’s championship.

In the men’s final current World champion Alan ‘Nasty’ Nash out toed ‘Doc Toe Scholl’ to claim his 14th World title, his 6th win in succession.  A lady called Rebecca Beech took the women’s title beating her mum, who had been a previous winner.

The competition began in Derbyshire in 1976 when a group of British walkers set about searching for a game that only the British could win.

With a lack of any talent in existing sports, the decision was made to invent a new one and the weird event has been an annual highlight since.

An arena aptly named the ‘Toedium’ is where the bouts are staged. Referee Ben Woodroffe got proceedings started with the announcement ‘Toes away’.

I did not know that

awkward who can do that?

That’s really weird but I would like to do that

yuck and cool at the same time

How do they do that?