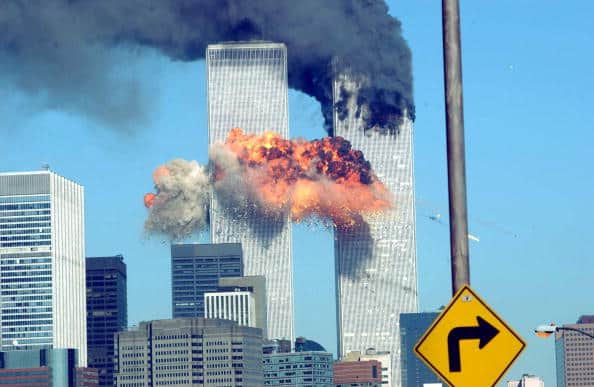 The 11th of September 2021 marks the 20th anniversary of the the deadliest terror attack on the United States.

In the United states, a special memorial service was held with former presidents Bush, Clinton and Obama all present – along with current president Joe Biden.

At 8:46am on September 11th 2001, a hijacked plane was deliberately flown into the north tower of the World Trade Center.

Seventeen minutes later, a second hijacked plane was crashed into the south tower.

The two 110-floor buildings, where the tallest skyscrapers in New York.

The US president at this time was George W Bush. He was visiting a school when the attack happened. He announced, from that school later in the day, that the events in New York were an “terrorist attack on our country.”

At 9:37am, moments after the president’s announcement, a third hijacked plane was deliberately crashed into the side of The Pentagon. The Pentagon is the defence headquarters of the United States. A fourth plane that had been hijacked crashed in a field in Pennsylvania after passengers fought back against the hijackers.

In total, 2,977 people (not including the 19 plane hijackers) died in the attack.

The group responsible for 9/11 was identified as al-Qaeda, an Islamist extremist group who planned the attacks from Afghanistan. Their leader was a man named Osama bin Laden. Al-Qaeda blamed America for many of the world’s problems.

They had been planning an attack on America for around 3 years.

How did America respond?

The attacks caused international outrage. George W Bush, the US President, declared a “war on terror”. In October 2001, America led an invasion of Afghanistan. This was supported by a a number of countries including Britain, Australia and New Zealand.

Although America and its allies succeeded in removing the Taliban government, it was ten years later that the US found and killed Osama bin Laden.

The military involvement in Afghanistan continued for around 20 years. It has only been this year, 20 years after 9/11, that the final American, British and New Zealand troops have left the area.

One main change following 9/11 was flight safety and airport secutiry.

Before September 11, children could go up to visit the plane’s cockpit and meet the pilots. That is no longer allowed. The security in airports around the world also became much stricter, including in New Zealand.

In New York, it took more than eight months to clean up “Ground Zero”. This was the name given to the site of the two fallen buildings.

A memorial and a museum now stands there.

Today, the tallest building in New York City is the One World Trade Center, or Freedom Tower. It stands exactly 541m high and is taller than the previous towers.

Shem Banbury is the Editor of Kiwi Kids News and is the Leader of Learning of Year 7/8 at Aquinas College, Tauranga. In his spare time, he likes to train and compete in long-distance triathlons.
READ MORE articles by this author
Subscribe
13 Comments
Oldest
Newest Most Voted
Inline Feedbacks
View all comments

I cant believe it’s been 20 years since it happened

That is so sad!

this is really sad

Shame for the Americans.
Those were the sucking Taliban led by Africans and Asians.