Why do cats always land on their feet? 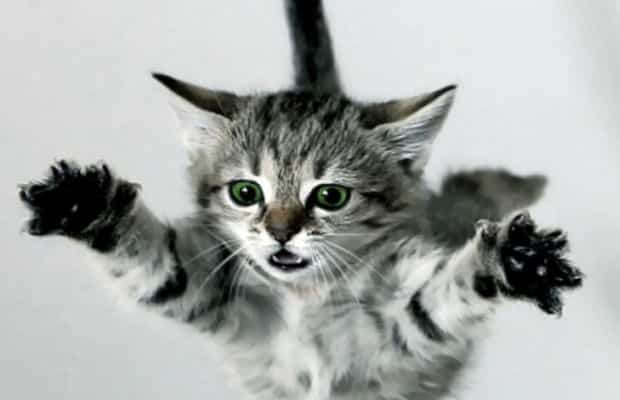 When a person falls from the fourth or fifth floor, and survives, it is a miracle. When a cat falls from that height, it lands on all fours, pauses, then straighten up and walks away looking barely fazed. How do they do this?

Well, it all has to do with the natural ability of a cat to adjust its position during a sudden fall. While humans tumble uncontrollably and completely lose control over their bodies when they fall, cats are able to straighten themselves even in mid-air and manage to fall on their feet.

A cat called Sabrina fell from the top of a 32-storeyed building and walked away with only a chipped tooth and a collapsed lung!

When a cat falls from a great height, on its way down, it extends all four legs sideways as if it is gliding. This exposes a greater surface area to the air below, almost like a tiny parachute.

And because cats are so light, at one point, the speed with which they fall is almost equal to the upward thrust of air and the two get balanced. As a result, the cat continues to fall but at a steady speed, unlike humans who hurtle down with an increasing speed to crash on the ground.

And the cat’s muscles that join and surround its bones make the best shock absorbers ever made!Cats do not tumble out of control because of their

exceptional sensory system. It immediately tells the cat’s nervous system that it is upside down and falling. Thanks to this, the agile cat twists its body at once for a safer landing. Even its feet are flexed in order to absorb the shock of the fall.

In fact, the cat’s agility, alertness and swift reaction to emergencies has given it the reputation of surviving no matter what happens.

Shem Banbury is the Editor of Kiwi Kids News and is the Leader of Learning of Year 7/8 at Aquinas College, Tauranga. In his spare time, he likes to train and compete in long-distance triathlons.
READ MORE articles by this author