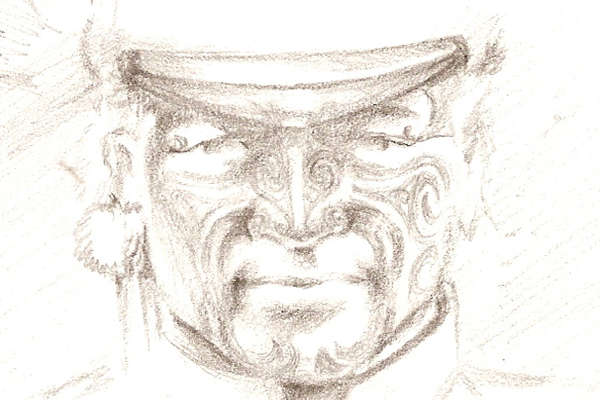 Moka Te Kainga-mataa was the youngest of three brothers, all influential Ngāpuhi chiefs. He was a general and a distinguished warrior during the Musket Wars, participating in a number of important battles. On 5 February 1840, at Waitangi, Moka and his brother Rewa both spoke against the proposed Treaty with the Crown, raising the issue of illegal land transactions by certain Europeans. He said, “Let the Governor return to his own country: let us remain as we were. Let my lands be returned to me – all of them…”

Although Moka’s name appears on the Treaty of Waitangi document today, there is no signature or mark on the document itself. It seems that Moka chose not to sign as a matter of principle, an issue that is now highly controversial. While many historians and academics have claimed over the past 160 years that Moka signed this document, there is a total lack of supporting evidence. William Hobson claimed he had acquired 26 of the 52 signatories from the Declaration of Independence (26 of 52 being 50%) and as such; partially ceded New Zealand to the Crown.

The decision by the Crown (the British Government) to claim sovereignty over New Zealand may rest upon this very claim.

If Moka was claimed as one of the necessary signatories on the Treaty of Waitangi, then there may have been some false or misleading claims perpetuated since the time of the signing.

If Moka was claimed as one of the necessary signatories on the Treaty of Waitangi, then there may have been some false or misleading claims perpetuated since the time of the signing.

Today, Moka’s role in the Treaty process is not commonly raised or promoted by government agencies, or within government documents. His questions and comments may challenge and question the Crown’s intentions and actions as not being entirely honourable. As a matter of fact, it seems like he has simply been disregarded or erased…

Despite the fact that his legacy has been missing from history for a long time, there is still a lot we can learn from Moka and from the way spoke up for what he believed in. While Moka’s arguments and beliefs were ignored at first, his message is finally coming to light. From Moka, we can learn how important it is to always speak up for what you believe in, even if you think that no one is listening. Your ideas and principles are always valid, no matter what anyone tells you. If Moka had never spoken up against the proposed Treaty, people would find it easy to claim that his missing signature is simply a typo in the history books. However, he made his message clear, and therefore more and more people are starting to pay attention to this potential inaccuracy.

If you don’t speak up, who is going to? By speaking your mind you encourage others to voice their opinions as well. If everyone holds back, the bus may silently head over a cliff. But, if like Moka, you are brave enough to speak up, your one small voice may play an important role in history in years to come.

Hannah is a fourth-year law student at Otago University, with one year to go until she graduates. She works part-time at a bookshop and is a volunteer legal advisor at Community Law. When she isn’t studying or working she enjoys cooking delicious plant-based food, reading lots of books, sleeping in and, of course, enjoying the student lifestyle in Dunedin. She loves that writing for Kiwi Kids News encourages her to think about the ways in which current events and societal issues affect young people uniquely.
Subscribe
0 Comments
Inline Feedbacks
View all comments