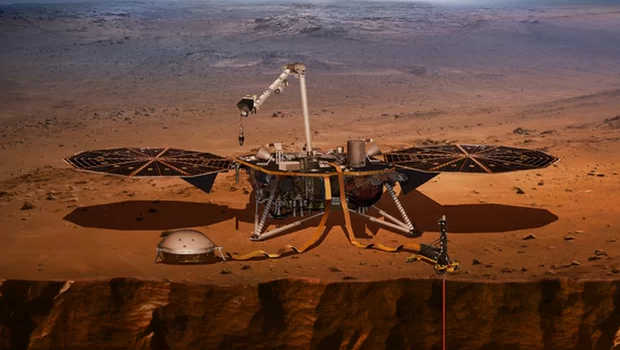 US space agency Nasa has landed a new robot on Mars after a dramatic seven-minute plunge to the surface of the Red Planet.

The robot is called the InSight probe and it aims to study the deep interior of Mars.

This will make it the only planet – apart from Earth – that has been examined in this way.

Nasa’s mission control in California erupted with delight when it became clear InSight was safe on the ground.

The probe landed safely on a flat plain known as Elysium Planitia, close to the Red Planet’s equator.

Engineers are currently awaiting a health report and a picture from the probe that shows its surroundings.

What is different about this mission?
This will be the first probe to dedicate its investigations to understanding Mars’ interior.

Scientists want to know how the world is constructed – from its core to its crust. InSight has three principal experiments to achieve this goal.

The first is a package of Franco-British seismometers that will be lifted on to the surface to listen for “Marsquakes”. These vibrations will reveal where the rock layers are and what they are made of.

A German “mole” will burrow up to 5m into the ground to take the planet’s temperature. This will give a sense of how active Mars still is.

And the third experiment will use radio transmissions to very precisely determine how the planet is wobbling on its axis.

Who took the picture?

what the flip? i never knew mars would be reasearched like that!

this touchdown is really nice

That is super cool