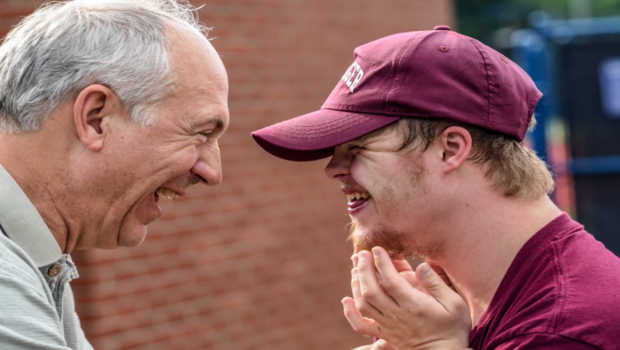 Two guys walk into a bar. The third one ducks.

Lame? Undeniably. A joke I made up? Most certainly not. This, is an example of A Dad Joke. What is a dad joke you may ask? They can be described as “cheesy, family friendly jokes that make dads laugh and kids groan.” Whatever they are, dads’ love them and kids love to hate them. They are just something that seem to come with being a dad. The desire to make their kid laugh in the corniest and most awkward way possible.

Dad jokes are simultaneously beloved and dreaded, deeply rooted in the familiarities of family life and yet universal enough to have a hashtag. When dad jokes get affectionately mocked or mockingly appreciated, they’re often characterized as ultimately harmless – but only barely clever.

The common nature of dad jokes might even reveal something about importance of a dad joke to today’s children. The humour that comes from the warm, cosy dad joke is like no other.  When a dad begins to tell a dad joke, you know that no matter what they say, the joke won’t hurt anyone. They are non-offensive and non-political. They seem to want everybody to get the joke, so they make it so stunningly obvious that anybody can get it. This is why dad jokes can be a relief from the viciousness and negativity of a lot of the other humour that tends to populate social media nowadays. Sometimes we just want to laugh innocently for a little while. There’s a comfort in that.

Sometimes, it seems like no one wants to hear a dad joke, and I know plenty of people who would love to see them wiped from our culture altogether. Whether it’s a real father teasing his child or a witty old professor throwing out a pun, dad jokes usually garner a less-than-appreciative response. Annoyingly, these clever remarks are contagious. Whenever I groan at one of my dad’s jokes, he just laughs and tells me I’ll be telling them to my kids one day.

But truly, dad jokes are an integral part of our society. Think back to when you were a child and hanging out with your dad. So, as a child, you said, “Hey, Dad, I’m hungry,” and he quickly responded, “Hi Hungry, I’m Dad,” and walked away grinning. I bet you made his day. And I bet he made yours. So don’t be afraid to laugh at a dad joke. Dad jokes are a fundamental form of humour that will persist as long as there are fathers in the world. They teach us a great lesson courtesy of goofy dads everywhere — that humour has the power to make people happy, even when it seems like nothing else can.

I encourage you to go home and tell your dad a bad joke that will put a smile on his face. And hey, while you’re at it, why not tell him you appreciate what he does? Not everyone has a father, so if you do, show him some love. Sure, it’s nowhere near Father’s Day, but any day is a good day to make someone happy.

Shem Banbury is the Editor of Kiwi Kids News and is the Leader of Learning of Year 7/8 at Aquinas College, Tauranga. In his spare time, he likes to train and compete in long-distance triathlons.
Subscribe
3 Comments
Oldest
Newest Most Voted
Inline Feedbacks
View all comments

because it does not make a point

I think that dad jokes are lame but I laugh not to hurt his feelings.
😅😅😅😅😅😅😅