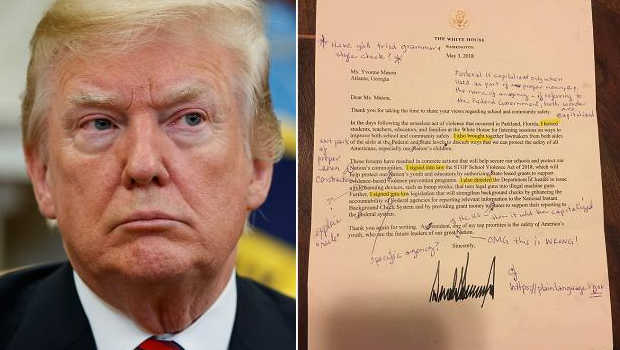 Yvonne Mason, a South Carolina school teacher, received a letter from President Donald Trump and it was riddled with mistakes.

“I have never, ever, received a letter with this many silly mistakes,” Mason said.

So Mrs Mason corrected the writing with red pen and returned it back to the White House. She dinged the Trump letter particularly for repeatedly capitalising “nation,” “federal,” “president” and “state,” turning these common nouns into proper nouns.

A photo of Mason’s corrections has been widely shared on social media.

“When you get letters from the highest level of government, you expect them to be at least mechanically correct,” Mason said.

Mason recognises that the form letter she received from the president was very likely written by a staff member, not Trump, though the letter does include Trump’s signature. It came in reply to a letter she’d written about the Feb. 14 school shooting in Florida.

Isn’t that funny? I never thought Trump would be bossed around by a teacher! maybe at school though.

too bad trump too bad

wow trump you should have written a better letter

wow you are so bad at writing letters

wow trump you should have written a better letter

I have graduated, Did Donald? Research it!

I don’t think Donald trump will be so happy about this because everyone seems to be laughing at him and still he’s the president.😔

Donald Trump is most likely to be lazy and should be fired.

that is HILARIOUS! i am not proud to be an american 🙁 😀

Good on her! Boo Donald Trump!!

You could just correct it then read it instead of sending it back.

this is so funny

Go back to school trump #shametrump 🤣👎

Hahaha im not in the least surprised 😀

That was a blue pen, not a red pen…

Donald Trump needs to learn how to spell.

You’d think a president would know much better than to send a horribly written letter like that. Although, I do find it quite humorous that this has found its place in the news.

Go back to school Trump!

WOW boo you people who didnt vote for hillary do you regret your descision now?

this is realy weard that donuld trump cant spell right