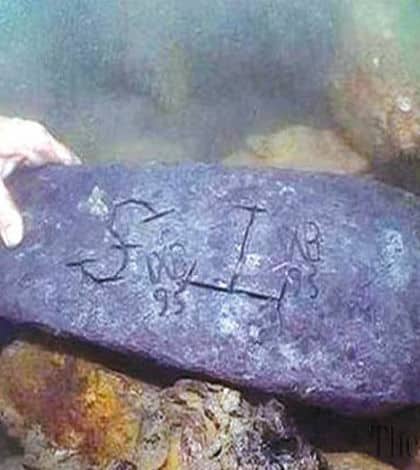 A 50kg silver bar was brought to shore on Thursday on the island of Sainte Marie. It was found in what is thought to be the wreck of the Adventure Galley.

One of the explorers believes there were many more silver bars still in the wreck and they have no doubt the bar is genuine.

The bar, which is marked with what appears to be a letter S and a letter T, will be exhibited in a museum.

Who was Captain Kidd?

He is thought to have been born in Scotland’s Greenock or the Dundee area in about 1645.

Captain Kidd was supposed to deal with pirates, a job he was appointed to by the British authorities. However, he later became a ruthless criminal and pirate himself and was executed in 1701.

In 1698, he stole from the Armenian ship, the Quedagh Merchant, which was carrying satins, gold and silver.

Captain Kidd was captured and brought back to London. He was found guilt of piracy and the murder of one of his crewmen during an argument in 1697. He was sentenced to death.

Afterwards, his body was dipped in tar and hung by chains along the River Thames to serve as a warning to would-be pirates.

Shem Banbury is the Editor of Kiwi Kids News and is the Leader of Learning of Year 7/8 at Aquinas College, Tauranga. In his spare time, he likes to train and compete in long-distance triathlons.
READ MORE articles by this author
Subscribe
15 Comments
Oldest
Newest Most Voted
Inline Feedbacks
View all comments

wow but i was expecting gold

Wow just wow.
Its not every day you find pirate things

Wow! That’s amazing and you don’t see that everyday!

that is cray cray!OMG it is not every day u see a random block of silver in the ocean! I wonder how much its worth? OMG.

awesome i want to find some