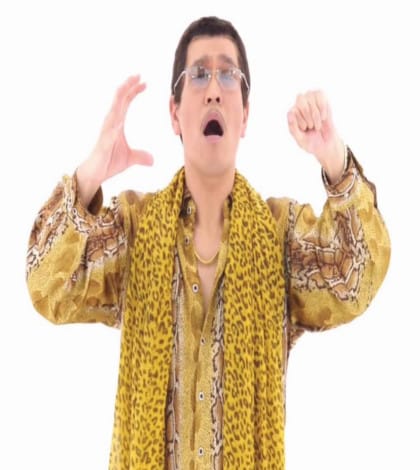 Japanese artist Piko-Taro’s 45-second YouTube sensation has become the shortest song ever to make it into Billboard Hot 100.

The song lasts just 45 seconds and contains about half a dozen words, but the infuriatingly catchy Pen-Pineapple-Apple-Pen (PPAP) has propelled the Japanese artist Piko-Taro into the Guinness World Records after his song became a viral hit.

Piko-Taro is the alter ego of the comedian and DJ Daimaou Kosaka.

The song made it to the top 100 with the help of Justin Bieber, who endorsed the new tune.

Dressed in his trademark animal-print shirt and trousers, the unlikely pop star said he had been stunned by the reaction to his song, which he put together in a few hours and cost only $1500 to make.

This song is so amazing! I love this song!

Honestly, I think the song is quite annoying, but I am fairly impressed with his success, and there is no point judging him, he seems like a good guy, he deserves the fame and attention 🙂

To be honest this song is pointless

This Is A Very Out Of The Blue Song

put in a lot of work but weird

this is really odd news

AWESOME I could listen to all day

Guest
i don't think you will know my name

this song never gets old

i love this song

come man this is the best song ever

best song i have ever heard

that is sort of funny ha’ha’ha

It is very annoying because people keep singing this song but I do still like it!👌🏻

Love it! My mum can not stand it.

Cool as, but annoying as

I have a bad
I have a comedy
UH
bad comedy
That describes my thoughts on PPAP.
It was funny the first time but…

PPAP I HAVE A pen i HAVE A APPLE UH PINEAPPLE PEN!! :DDD

I don’t under stand why so many people like that song, I mean, I’m one of the weirdest people in our school but I just don’t know why people love that song so much.

THIS SONG IS THE BEST SONG

It is quite annoying, and I can’t seem to get it out of my head, and I don’t understand how it is funny, but for some reason I LOVE IT!

I LOVE THAT SONG HAHAHA LOVING IT UGH PINEAPPLEPEN

That song is quite annoying he seems like a good guy.🤑

This song is sooo cool!!!