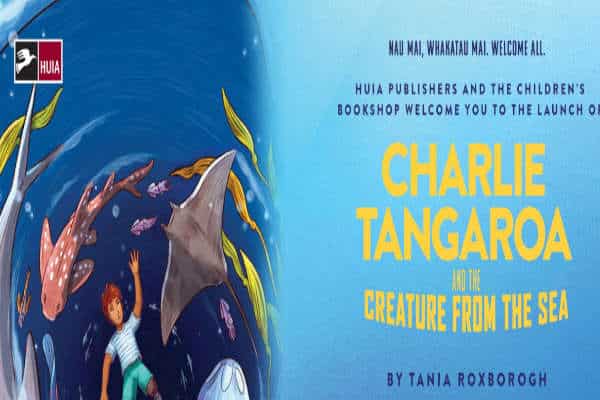 A disabled Māori boy who meets a mermaid on the beach won over the hearts of the judges at this year’s New Zealand Book Awards for Children and Young Adults.

Charlie Tangaroa and the Creature from the Sea by Christchurch author T K Roxborogh was awarded the Margaret Mahy Book of the Year, the highest accolade in children’s publishing, at a ceremony held at The National Library of New Zealand Te Puna Mātauranga o Aotearoa this evening.

Māori mythology is woven into the story as Charlie draws on the pūrākau and waiata his Grandad taught him, as well as the down-to-earth lessons from family life, to mediate between battling, sibling gods.

The book also took out the Wright Family Foundation Esther Glen Award for Junior Fiction, and impressed the judges with its diversity of characters and their authenticity, and the inclusion of a main protagonist with a disability.

“We felt that this added depth to the story while not being the focal point, as did the underlying issue of humans disturbing the natural environment,” says convenor of judges Alan Dingley, who praised the book’s uniquely New Zealand story.

The awards night recognised new talent, with half the category winners also being finalists in the Best First Book Award category.

“Having so many first-time winners shows that as New Zealand evolves, authors and publishers are evolving too, with new ideas, new concepts and a lot of bravery represented in these titles,” says Dingley.

One of those talented first-timers was Kate Parker, author and illustrator of Kōwhai and the Giants. As well as winning the Best First Book Award, the book — described as a classic in the making — also scooped the Picture Book Award. The judges were enamoured with both the message and the original illustrations of this gentle environmental story.

The Young Adult Fiction Award was won by another debut author. Shilo Kino’s The Pōrangi Boy was praised for delivering big themes of environmental damage, neocolonialism, bullying and poverty, but never slipping into didacticism or preachiness. The judges commented on Kino’s “uncontestable genius” for crafting believable, authentic voices thoroughly rooted in this place and these times.

A fresh talent also won the Russell Clark Award for Illustration, presented to Laura Shallcrass for Hare and Ruru: A Quiet Moment. The book’s beautifully delivered world and message made it stand out for the judges.

A visually delicious, tasty treat won the Elsie Locke Award for Non-Fiction. Egg and Spoon: An Illustrated Cookbook, written by Alexandra Tylee and illustrated by Giselle Clarkson, impressed the judges with its varied and thoughtful recipes accompanied by luscious and often humorous illustrations.

The Wright Family Foundation Te Kura Pounamu Award for te reo Māori went to Ngake me Whātaitai, written by Ben Ngaia and illustrated by Laya Mutton-Rogers, a pukapuka that takes the reader on a wonderful journey into the formation of Te Whanganui a Tara (Wellington). Through storytelling, children learn about the pūtaiao (science) of the hidden movements within Papatūānuku, and how these beautiful Māori placenames were given.

Inspiring a love of reading in New Zealand children is a big part of the Awards’ remit. Many of this year’s finalists had the opportunity to present their work to thousands of children around the country in a programme of Books Alive online events and virtual story times, co-ordinated through public and school libraries by LIANZA, the Library and Information Association of New Zealand Aotearoa.

The finalists also entertained over 600 Wellington school children during the day prior to the ceremony. The hard-working team at Wellington City Library organised a varied programme that included story times, behind-the-book talks, workshops on writing and illustration, lively panel discussions, and live drawing sessions.

The full list of winners for the 2021 New Zealand Book Awards for Children and Young Adults:

Charlie Tangaroa and the Creature from the Sea, written by T K Roxborogh (Huia Publishers)

Charlie Tangaroa and the Creature from the Sea, written by T K Roxborogh (Huia Publishers)