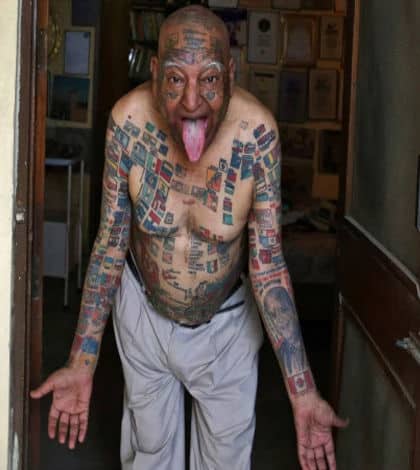 An Indian man obsessed with setting Guinness world records has removed all of his teeth to claim a new record.

Har Parkash Rishi, had all his teeth removed so he could put nearly 500 drinking straws and more than 50 burning candles in his mouth.

Mr Rashi, who has 366 flags tattooed on his body, claims to have set more than 20 records, now calls himself Guinness Rishi.

Born in 1942 in a cinema hall in the capital, New Delhi, Rishi first got into the Guinness Book of World Records in 1990 when, with two friends, he rode a scooter for 1001 hours.

He even got his family involved — his wife Bimla holds a 1991 record for writing the world’s shortest will: “All to Son”.

While it is the tattoos on his body, more than 500 in all, that brought him fame, Rishi, an auto parts manufacturer by profession, says the toughest one was stuffing the straws in his mouth.

“I am the world record holder of 496 straws in my mouth …
“For that record, I needed space, I had to remove every tooth so that I could put maximum straws in my mouth,” Rishi told Reuters Television before re-enacting the feat on camera.

He is now getting images of global leaders tattooed on his body to add to images of Indian Prime Minister Narendra Modi, US President Barack Obama, Britain’s Queen Elizabeth and Mahatma Gandhi, the leader of India’s independence movement.

Shem Banbury is the Editor of Kiwi Kids News and is the Leader of Learning of Year 7/8 at Aquinas College, Tauranga. In his spare time, he likes to train and compete in long-distance triathlons.
READ MORE articles by this author
Subscribe
29 Comments
Oldest
Newest Most Voted
Inline Feedbacks
View all comments

Ewww
How will he be able to talk without any teeth. Like how can he pronounce the letter t..because u need teeth to pronunciation that letter…don’t u???

That is AMAZING!Though I wouldn’t do it…

Cool. Must have been painful though

Who Would Do That

I would never do that

Wowzas look at that guy!

Why would happen now? Would he get new ones? That is a lot of guinness world records

THAT IS ONE CRAZY PERSON> I MEAN WHY WOULD ANYONE DO THAT TO THEIR TEETH. JUST BECAUSE OF ONE STUPID WORLD RECORD THING. HOW WOULD HE EAT WITHOUT HIS TEETH. CRAZY!

I think that’s a bit overboard. Removing all your teeth means you’ll have trouble eating and all sorts of other disadvantages in life. I’d rather keep my teeth and not be famous than remove all my teeth and be famous.

Not The smartest move! I would rather keep my mouth full of shiny white teeth! Than have them removed and not be able to eat!

Who would do that?

He must be mental. Too obsess with wanting to be famous!!
Anyway, he looks like a crazy guy. Look at all those tattoos on him!