Man dies from eating too much licorice 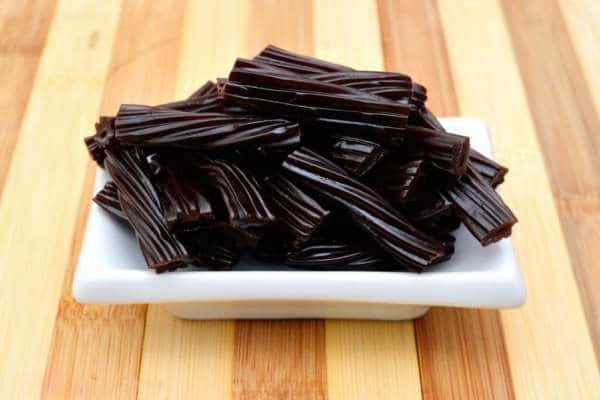 A recent study has shown that a 54-year-old man died as a result of eating too much licorice.

The man, a construction worker from Massachusetts, lost consciousness inside a fast-food restaurant. He was taken to a hospital, where he died the next day.

Doctors wrote that he had “a poor diet, consisting primarily of several packages of candy daily,” and that three weeks before, he switched from eating fruit-flavored soft candy to licorice candy, which contained glycyrrhizic acid.

Glycyrrhizic acid, or glycyrrhizin, a sweetening compound derived from licorice root. It can cause a drop in potassium levels in the body, which in turn may cause high blood pressure, swelling, abnormal heart rhythms and even heart failure.

People 40 or older should be especially vigilant about their black licorice consumption. Even 60grams per day, over a two-week period, could cause irregular heart rhythm.

However, the scientists also said that negative effects of eating too much licorice are reversible, and stop when consumption is halted. A return to normal potassium levels may take one to two weeks, according to the study.

Luckily, there are safe alternatives. According to the NIH, many licorice products available in the US don’t actually contain licorice, but rather anise oil, which is comparable in flavor.

Shem Banbury is the Editor of Kiwi Kids News and is the Leader of Learning of Year 7/8 at Aquinas College, Tauranga. In his spare time, he likes to train and compete in long-distance triathlons.
READ MORE articles by this author
Subscribe
79 Comments
Oldest
Newest Most Voted
Inline Feedbacks
View all comments

thats odd but why would he when licorce is so good and yumm!!!!!

how many pieces of liquorice did he eat EXACTLY?????? This is just for scientific purposes so i dont end up dying from liqourice

this is so sad what if it was my grandad

I eat red licorice with chocolate in the middle but im 11 years old and i dont eat sevral packs a day,personaly i dont think red licorice can kill anyone

Sad but not surprising

thats sad but why would he eat so much?

it is sad and almost sounds impossible

that is just sad i love licorice

Last edited 3 months ago by nate
50

u should read this

thats sad… but he must be pretty fat…

thats so sad, how old was he?

that a lesson learnt never eat to much candy

I mean my dad once told me that if i eat to much licorice i will die so i never get it. It’s really sad cause I love it so much

Don’t mess with the licorice

so my mommy say im not allowed to eat sweats

So sad 😥 It just goes to show how lots of candy/licorice can affect you.

sad and bad cause why would you eat that much

i am a car

me, myself and I

that poor man. this is why we should eat apples!

That’s sad, but his problem. I’m sorry for those that new him. Anyway black licrice is gRoss.

Last edited 3 months ago by Jess
12