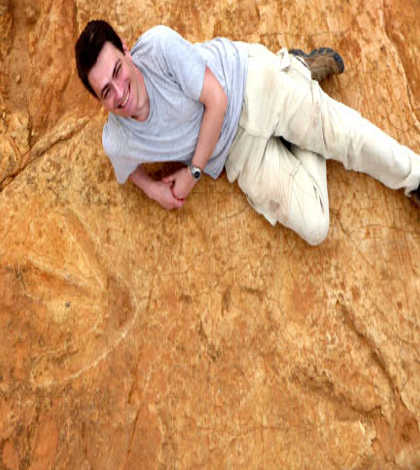 Scientists have discovered evidence that a huge dinosaur – an ancestor of the T-rex – roamed in Africa 200 million years ago.

Megatheropods are an earlier species that turned into the Tyrannosaurus rex.

Each of the three footprints measured 57cm long and 50cm  wide.

Megatheropods are a larger version of theropods, which were meat-eating two-legged dinosaurs.

It was described as a “significant find” by co-author Dr Lara Sciscio, from the University of Cape Town.

“Globally, these large tracks are very rare. There is only one other known site similar in age and sized tracks, which is in Poland.”

Wow that is pretty cool! It is so big.

hi
this is interesting

That is crazy!
I used to be a dino expert but now?!?! I hope they find the skeleton

this cant be true

wow i hope they find bones cuse I <3 dinosaurs

This is sooo cool a T-Rex!?