Lighthouse moved 70 metres to protect it from the sea 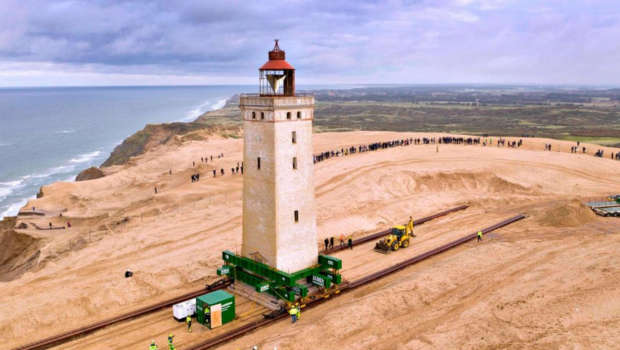 A lighthouse in Denmark has been moved 70 metres inland due to coastal erosion.

For 120 years, the Rubjerg Knude lighthouse has been perched on a sand dune on the northern Danish coast, but coastal erosion from North Sea winds threatened to topple it into the sea.

Originally, the lighthouse stood 200m from the sea, but erosion has reduced that by 2m a year, leaving it only a few meters from the edge.

Now the 720-tonne structure has been saved, in an operation to lift it up and move it 70m inland “like skates on rails”.

It only too a few hours to transport the lighthouse to its new position.

The engineers had assumed the lighthouse weighed up to 1,000 tonnes but discovered as they lifted it on Tuesday that it was a mere 720 tonnes and therefore a little easier to move.