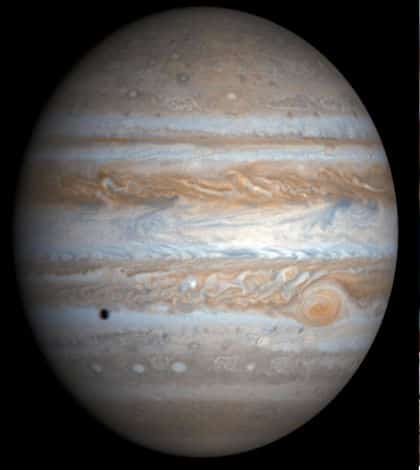 Researchers from the UK and USA have found that Jupiter’s Great Red Spot is blasting the planet’s upper atmosphere with heat.

Using measurements from an infrared telescope in Hawaii, they found evidence for temperatures as high as 1,300 degrees Celcius – hundreds of degrees warmer than anywhere else on the planet!

They suggest the hotspot is created by thunderous soundwaves “breaking” in the thin upper reaches of the atmosphere.

This finding may offer a solution to why Jupiter is so warm.

Wow. I never knew that Jupiter had a red spot that is extremely hot.

Yummy it must be a giant spot of tomatoe sauce

wow
twice the sise of the earth big

I am glad I read this article

this is a very great piece of information for reading

Wow, I didn’t know that Jupiter had a great red spot that’s actually a spinning storm in it’s atmosphere! It’s very interesting that I know know though.

I think this is great news beacuse you tell us whats happing in jupiter and u go in to detail so we know alot about.keep it up

i didnt know that there was a spinning storm on jupiter and that that it was over 1,300 degrese

I think this article is very great for young learners like myself and the way you wrote this event was easy for me to read and this is a very interesting topic to share.

Really interesting,Wonder how it got there.

Wow, that is fast and hot!

We would burn to deth