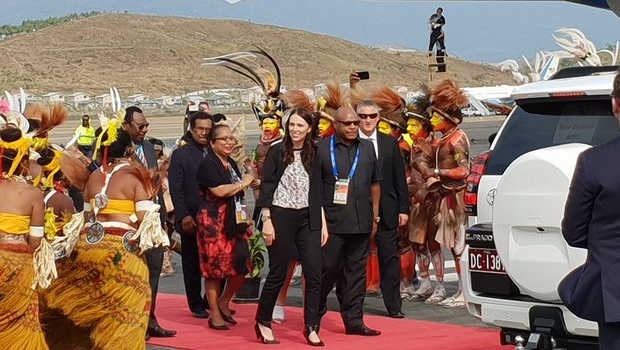 The Prime Minister, Jacinda Ardern, arrived in Papua New Guinea on Sunday afternoon for APEC leaders’ summit.
APEC stands for Asia Pacific Economic Co-operation. The APEC summit is the annual meeting of the 21 Asia and Pacific countries.
This year trade, security, and climate change are expected to dominate discussions among leaders at the APEC leaders’ summit.
Security is tight at Port Moresby, the capital of Papua New Guinea, with foreign warships including the patrol vessel Otago, stationed in the harbour.
New Zealand has given $15 million to Papua New Guinea to help stage the summit, but it’s been earmarked for training and security.
Australia and China have also been big financial backers of the summit, and Australia is also deeply involved in providing security.
China’s leader Xi Jinping is attending, but neither Donald Trump nor Vladimir Putin will be there.
The New Zealand government has committed close to $30 million to foreign aid projects in Papua New Guinea.
New Zealand will join Australia, Japan, the United States, and South Korea in a $1.7 billion project to expand electricity coverage.
New Zealand’s contribution is about $20m.
Ms Ardern said the government will also give close to $10m for immunisation campaigns, particularly for polio which has re-emerged in the country.

I wish I could have that much money