How does digestion work? 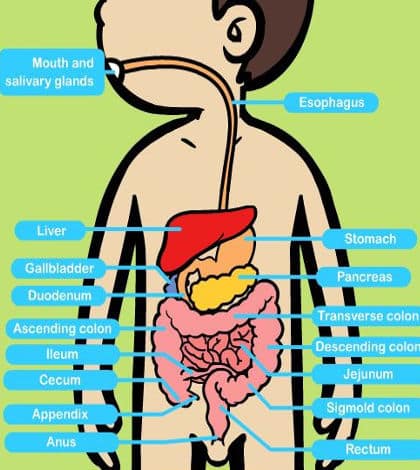 Digestion is the process by which food is broken down into its smallest parts, which can then be absorbed into the bloodstream and used by our bodies to grow, repair, and function.

How do we digest food?

Mechanical
Food is broken down in the mouth by our teeth as we chew.
The mouth also contains saliva, which is a watery fluid that moistens and lubricates the food.
Saliva also contains amylase, which is a digestive enzyme that starts breaking down starches in the food.
The swallowing reflex moves food into the oesophagus, where involuntary muscle movement called peristalsis moves the food down into the stomach.

Chemical
Within the stomach the food is churned and mixed with gastric juice, which is produced by cells within the stomach lining.
Gastric juice is highly acidic, and also contains enzymes which start to break down the protein in the food, eventually reducing it to a creamy paste known as chyme. At the bottom of the stomach, the chyme moves into the small intestine, or duodenum.
Juices from the pancreas and bile from the liver enter the duodenum and help to lubricate the partially digested food as it moves through the gut. Large molecules within the chyme are broken down into small molecules so that they can be absorbed into the bloodstream.
The enzymes that we use to break down food are made in our cells, and we make different ones to break down specific types of food, for example – carbohydrates or proteins.

Absorption
The small intestine is where nearly all of our food is absorbed into our body. Once broken down into smaller molecules, the nutrients can be absorbed through villi, which are tiny structures shaped like fingers protruding from the lining of the small intestine.
Villi increase the available surface area so that as many molecules as possible can be absorbed and carried into the bloodstream.

Elimination/Egestion
By the time the digested food products have reached the end of the small intestine, most of the useful nutrients have been removed, and only indigestible elements remain.
The large intestine removes water, and forms and stores the faeces. A large amount of bacteria (more than 500 species) are present in the large intestine. These help to recover any remaining nutrients from the food, and also make some vitamins – such as Vitamin K – for the body to use.

As undigested material accumulates in the rectum, it stimulates a response that leads to the evacuation of the waste through the anus.
How do we get energy from food?

Once food is broken down by the digestive process and enters the bloodstream, the molecules from the nutrients it contained travel in the blood to every cell. Inside the cells, they are used to give us energy, as well as to grow and maintain our bodies.

Shem Banbury is the Editor of Kiwi Kids News and is the Leader of Learning of Year 7/8 at Aquinas College, Tauranga. In his spare time, he likes to train and compete in long-distance triathlons.
READ MORE articles by this author
Subscribe
3 Comments
Oldest
Newest Most Voted
Inline Feedbacks
View all comments

Who likes the appendix? NOT ME!

yo this is cool as