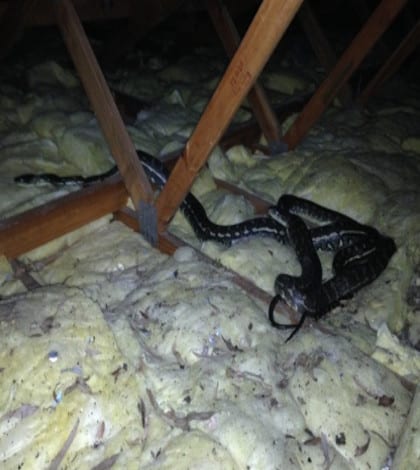 A family that heard rustling in the attic was surprised to find a 2 metre long boa constrictor that had likely been living there for two to four years.

Adam van der Herchen had been hearing noises coming from the attic and spotted a snake through an opening in the ceiling at his home in Englewood, Florida.

Animal Control arrived at the home twice but were unable to remove the snake both times. Officers told the family it was likely a diamondback rattlesnake.

Snake expert, Mark Lampert, then came to remove the snake. Lampart found snakeskin in the attic, indicating it had been there for up to four years.

After a two-hour search, Lampert located the snake and removed it, discovering it was not a rattlesnake but a Columbian red tail boa constrictor.

woah that is so cool wish i could be that snake

that is just creepy

That must be scary

I would want to keep it as a pet…

i want to keep the snake as a pet because i like snakes.

i want to keep the snake as a pet

I wonder how they got there?

I wouldn’t want to keep it as a pet, I would get out of that house!

that is so cool but scary at the same time

I wonder how the snake survived and how come they not know there’s a creature in the attic for four years!
!?!?!?!?

Wow so scary how did it get up there?

Interesting – Different thoughts on what type of snake.
I wonder how long they lived in the house. Red tail boas are usually pets or at least start out that way. Maybe there are rats in the house as well that kept the snake alive and growing (Shed skin).

Did they even remove the snake? That is dangerous, children may live somewhere near there.

That’s freaky. How did it get up there

that is very scary

That would be so creepy. What would happen if it came down and ate them at night? i’m going to have trouble going to bed at night now!!!

dude I would be screaming my head off if I was living in that house and I saw that snake.

That is scary! I hope there arent any boa constrictors in my attic

wow that must be scary

that is reall coool

I don’t want a snake in my house
crazy cool

they would of been frightend :0

Shame on you snake