Elephant lives with bullet in head 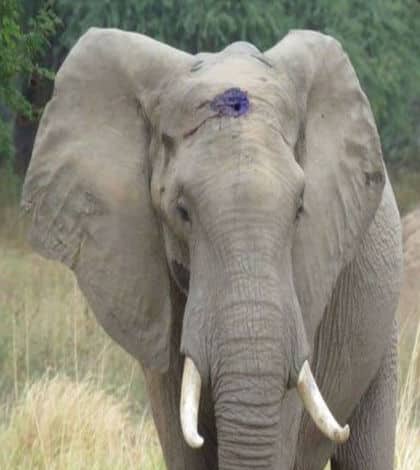 An elephant in Zimbabwe has received medical treatment from a conservation group after being shot in the head by suspected poachers.

The elephant was found by veterinarians from Aware Trust Zimbabwe in Mana Pools National Park.

He is believed to have been living with the bullet in his head for between three and six weeks.

Pretty Boy, as he is nicknamed, is thought to have come into the park after being shot.

A metal detector was used to scan the elephant’s head. The team sedated him, took an X-ray and cleaned the wound but judged it safer to leave the bullet in place.

If the shot had hit a few centimetres lower down it would have gone into his brain.

The elephant is believed to be around 25 years old.

That’s really sad I think poaching should be illegal

That is sad. STOP POACHING! 🙁

I believe that this Elephant can live for a little more. I feel sad about the Elephant.

that is really sad hope he feels well

Why do people poach! STOP POACHING!!!

WOW THATS SAD for the elephant.

Yeah hope he gets a “shot” at continuing to live his life.

How sad is that

Guest
life is a potato

How is he still living?
If it went into his brain, then wouldn’t he drop dead?

Who ever did it that is mean. They should have been gone to prison

what a tough Elephant.

what a tough Elephant

Its not poaching ppl it just said in the article that the elephant somehow wondered into a park and some dude shot it in the head! He wasn’t poaching, he probably didn’t even want to kill or aim for the elephants head. 🐱