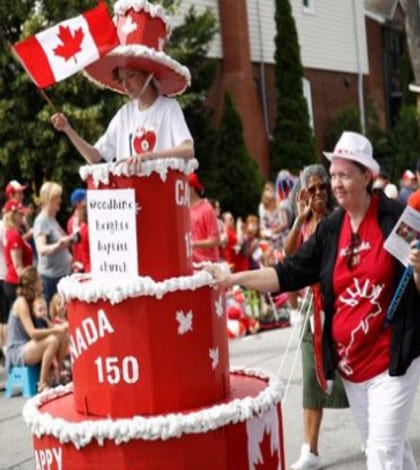 Canada has marked its 150th anniversary as a country in towns, cities and at backyard barbecues nationwide.

Thousands of people joined in celebrations at Parliament Hill in Ottawa. A huge display of fireworks concluded the day’s celebrations.

Canada’s Prime Minister Justin Trudeau gave a speech in both English and French, a tradition in Canada, which recognises both as its official languages.
“This is as good a reason as any to reflect on our past, to cheer on today, and to recommit ourselves to the future,” he said to the 25,000 partygoers.

But he also took a moment to remember Canada’s indigenous people, whom he said had been “the victims of oppression” since the first settlers arrived.

Prince Charles was in Canada helping to mark the occasion. Prince Charles’ mother, the Queen, is Canada’s head of state.

What is Canada Day?

Canada Day, held on 1 July each year, marks the merging of four former British colonies into a single new country. It is a national holiday.
The country grew in size in the years that followed, and finally achieved complete autonomy from the UK in 1931. It was not until 1982, however, that the British parliament transferred final legal powers to Canada, including the power to amend its constitution.

this is so sad