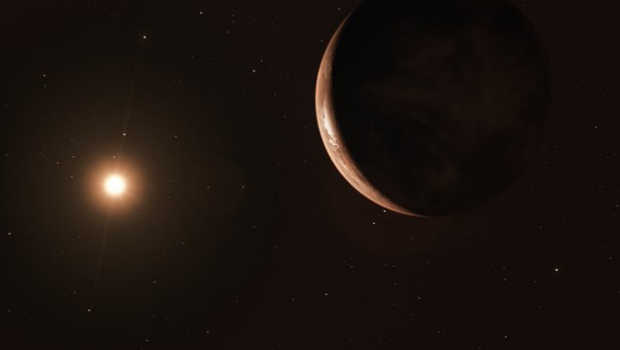 Astronomers have discovered a planet around one of the closest stars to our Sun.

It orbits Barnard’s star, which sits six light-years away.

The planet’s mass is thought to be more than three times that of our own, placing it in a category of world know as “super-Earths”.

“We think that this is what we call a Super-Earth – that would be possibly a mostly rocky planet with a massive atmosphere. It’s probably very rich in volatiles like water, hydrogen, carbon dioxide – things like this. Many of them are frozen on the surface,” Guillem Anglada Escudé, an astronomer from Queen Mary University of London said.

Astronomers have called this new planet Barnard’s Star b. It is about as far away from its star as Mercury is from the Sun.

Barnard’s Star b is known as an exoplanet. It’s the second closest exoplanet to Earth after Proxima Centauri b, whose discovery was announced in 2016.

On distance alone, it’s estimated that temperatures would be about -150C on the planet’s surface. However, a massive atmosphere could potentially warm the planet, making conditions more hospitable to life.

When the next generation of telescopes come online, scientists will be able to characterise the planet’s properties. This will likely include a search for gases like oxygen and methane in the planet’s atmosphere, which might be markers for biology.

“The James Webb Space Telescope might not help in this case, because it was not designed for what’s called high contrast imaging. But in the US, they are also developing WFirst – a small telescope that’s also used for cosmology,” said Dr Anglada Escudé.

What is an exoplanet?
Exoplanets are planets that obit a different star than our Sun – in a different solar system to the one we are in.

Shem Banbury is the Editor of Kiwi Kids News and is the Leader of Learning of Year 7/8 at Aquinas College, Tauranga. In his spare time, he likes to train and compete in long-distance triathlons.
READ MORE articles by this author
Subscribe
27 Comments
Oldest
Newest Most Voted
Inline Feedbacks
View all comments

I still don’t understand i mean is it the closet to the sun or what?

there is a new planet wow

Just remember Guy’s by when it say’s “New Planet” It doesn’t actually mean its a New Planet, It has probably been there for a maybe a Billion Years just sitting there all lonely just its taken us this long to find it.

I found this really interesting but I was a bit confused what an exoplanet meant. I thought that it maybe meant outside of our solar system or galaxy.

Don’t Make People Feel Bad Jacob, What If It Is A New Planet? Speaking Of That I Wonder Who Lives There

what is its name?

what is the new planet name???

when did they found out

that is so cool ay

am so proud of the move

did it get it get made with magic

What a lame planet

we can make planes to go to plants like this one

Nice, So have we ever been on this new planet?, can we reach the planet? or can we actually live on it?.